Smule is a karaoke app that allows people all over the world to connect while singing and making music. However, it seems as though that some users don’t feel included.

Why do we say this?

The topic “solo singing” occurred in 8% of the reviews and has an average of 2,28 / 5, which indicates that it’s mentioned in a negative way. It was mentioned that some were disappointed that they couldn’t choose to sing solo, without being VIP.

This leads us to the next topic “VIP features” that has an average grade of 2,37 / 5 and occurred in 15% of the reviews. It seems that some users were dissatisfied with some of the features requiring you to be VIP. This was perceived as being very restrictive for regular users. Some also wished that the VIP feature would be less expensive.

The topic “usability” occurred in 20% of the reviews and has an average grade of 1,94 / 5.  Some claimed that the app is nearly unusable without paying for the VIP features. As mentioned before, some users didn’t like that you have to pay to be able to sing by yourself. It seems regulars users would too be able to sing without any strangers.

In conclusion, Smule may need to look into how to change the VIP features. Not being able to sing solo without paying seems to be preventing some users from using the app at all. The company could either decrease the VIP cost, or they could let regular users sing solo. This could, for instance, be limited to a certain amount of songs per day.

Get Started for Free

Learn about our AI-powered text analysis tool in a Personal Demo.

Then get a Free Trial to test-run Gavagai Explorer using your own data. 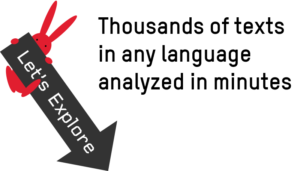 The research team at Gavagai performed this analysis using our AI-powered text analysis tool, Gavagai Explorer. All texts analyzed in this article are collected from public online data published on Google Play Store.

Check out the results yourself!

Want to try this kind of analysis on your own data?

Gavagai Explorer is free to try (no credit card needed) and works in 46 languages.

Book a demo to find out more!

Get Started for Free

Learn about our AI-powered text analysis tool in a Personal Demo.

Then get a Free Trial to test-run Gavagai Explorer using your own data.